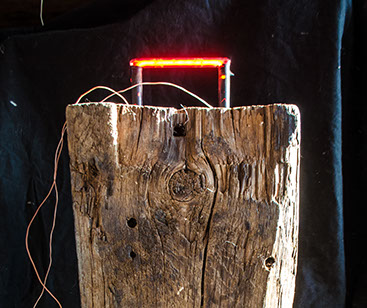 If You Go down to The Woods Today 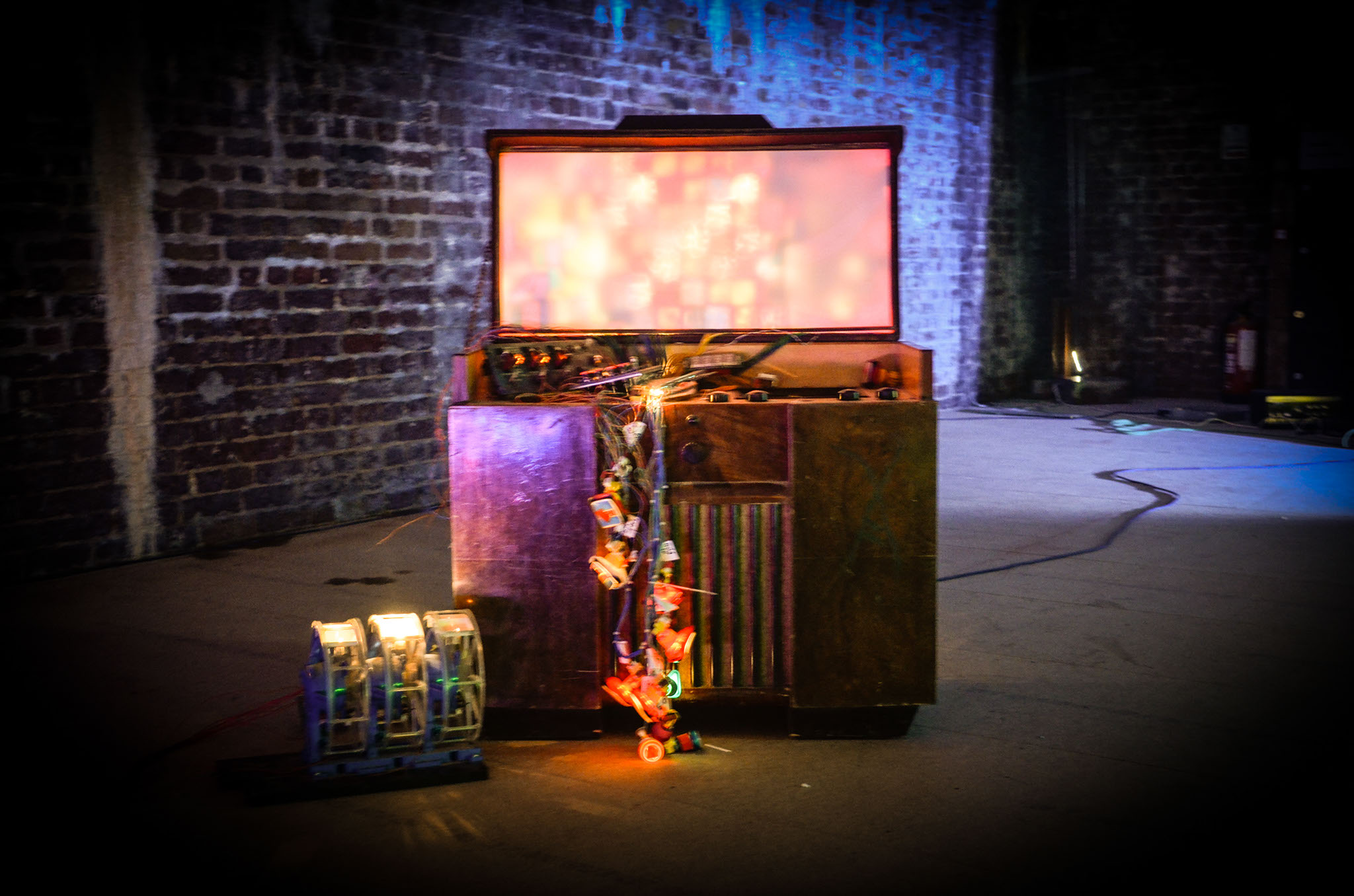 There’s a whole heap of madness going on in most people’s minds, most of the time, isn’t there? Unlike everyone else, however, artist Simon Tyszko has the good sense to set it free, run with it, and allow his wildest thoughts to become touchable.

Like the full-sized Dakota airplane wing installed in his flat on the fifth floor of a Fulham council estate.

Or his work in cocaine, Absolute Hypocrisy, that made a criminal of the buyer – the ‘deal’ taking place in a Parisian hotel room.

His practice is an ode to what-if, a punk-prayer to the possible. His regular radio show, isotopica, is a cornucopia of his most recent explorations in tangibility – some of the best bits that have made it from mind to airwaves. 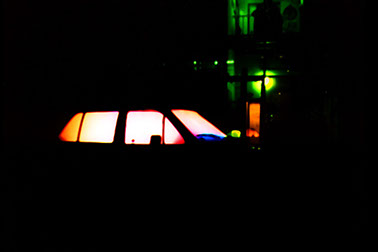 A Text by Peter Suchinv

“Yellow and then black in the wink of an eye and then yellow again”: this line from Claude Simon’s The Battle of Pharsalus, reads like a description of a moment in the pattern or cycle of a neon work by Simon Tyszko, for whom that medium has taken on a paradigmatic role. [1]

For neon is the signifier of the Modern par excellence, the ever-present yet ethereal element of illumination, of a saturation and penetration of light to all spaces and places where Capital – that is the motive force and social system we call “Late Capitalism” or “Post-Industrial Society” – has penetrated. Neon – the name itself, from the Greek, means “new” – exemplifies ultra “cool” technology, it is the “mechanical” gift of the gods that makes the contemporary city shimmer and glimmer like no other technology of light before it. Paradoxically glamorous and mundane at one and the same time, neon both illuminates the western world and renders it opaque, hides in its folds and waves of brightness the falsehoods perpetuated ad nauseum by the advertising industry.

The technological wonder that is neon itself makes this evident and visible through its functional action of illumination, but its use within advertising and within the very fabric of the city itself is its means of disguise, pretending to the apparent neutrality of a utilitarian device whilst its snazzy ubiquity makes marketing, glamour and glitz appear as natural (as opposed to entirely partisan) modes of presentation, influence and address.

Claude Simon’s description of a shift from yellow to black, from colour to darkness or void is not merely akin to the physical features of Tyszko’s fluorescent constructions; it is also aligned with the moment of realisation in which something appears, in this case literally, in a different light. Tyszko, although not born within that generation which invented what has now become somewhat reified as “Conceptual Art”, is an artist who, first and foremost, takes ideas as the point of departure for his work, and not materials, processes or techniques.

This can be seen when one inventories the approaches and forms used by the artist to date: neon, photography, film and video, sound recording, books, computers, fabrics, cocaine and other “found objects”, language, and, perhaps most notoriously, architecture and installation in the case of his project Phlight (2006), in which a copy of an actual size Dakota aircraft wing was permanently installed within a West London council flat, slicing the living areas into awkward zones of indeterminate potentiality, and creating a hybrid form, part museum, part private residence, in the manner of Kurt Schwitters’ Hanover Merzbau or London’s Sir John Soane Museum.

But if the devices and techniques he employs in the making his work are multifarious, determined by the particular contexts and resonances Tyszko aims to address, these latter are consciously and consistently focused: advertising and glamour and their irritating but powerful attributes (control, influence, addiction), the structure and framing of art, the family and the “autobiographical” sense of self. What runs through all these diverse but interrelated areas of concern is the connecting thread of the political, by which I mean a determination on Tyszko’s part to examine how our present culture constructs, manipulates and inscribes value, both within the broader structure of society and in the microcosm that is the world of aesthetics and art.

The title of a very recent neon (2011) is also a phrase that succinctly describes the universe:

Invisible tremblement des atomes (the invisible trembling of atoms); In an earlier piece Tyszko has presented neons in the shape of letters of the alphabet that flicker on/off like the components of a secret cod awaiting the viewer-reader’s decipherment. Red, yellow, blue and other coloured letters materialise then fade to black.

A third type of neons assembled by the artist have been put together as panels on which four or five tubes run in parallel along the support. The rods are of different colours and lengths, an arrangement that foregrounds colour itself (as produced with the variations and colour influences that the juxtapositions produce); this material immateriality of colour may be regarded as one of Tyszko’s formal devices, separating, in a sense, the light emitted from the tubes that generate it.

One recalls Roland Barthes’ remark: “If I were a painter, I should paint only colors: this field seems to me freed of both the Law (no Imitation, no Analogy) and Nature”.  [2] This gratuitous deployment of colour, an indulgence, in both senses of the term, is a way of using the glamour of the neon (with its convenient, conventional symbolism) against itself, a disruption of the message signal through an emphasis of signification in its pure state.      More particularly, each piece in this third category has its own “colour signature”, its own specific alignment and mood. Seeing several of these assemblages together allows one to grasp the subtlety of individual works.

The beautiful brightness of the illuminated tubes has its melancholy side however; something about the sadness of the loss of Tyszko’s photographer brother when the artist was just ten years old,  seems to hover about them. The trace of this loss is inherent within many of Tyszko’s works, in the neons but in many other pieces too.

Absence, disappearance, or the impossibility of adequately pinning down the passing of time runs like a leitmotiv through Tyszko’s work. Highly detailed photographs of long-playing records in which every groove, together with the scratches across the record’s surface and the dust caught in the tracks, engage the viewer in a paradoxical encounter wherein the sonic is rendered mute, and the particularity of a given experience of listening is translated into a visual image.

We are not told which records Tyszko has photographed but the sense that these individual objects hold (or held) deeply personal meanings for a specific listener is very strong. The scratches and dust only serve to heighten the intimacy of an individual’s encounter with a work of art. Tyszko’s practice operates at this finely and rightly tuned level of engagement: the subjective and the idiosyncratic becoming the foil, the ground and the condition of a highly meaningful exchange between public and private frames of reference.

Most recently, Tyszko has produced a series of works in which pictures borrowed from his own family’s photograph album have been grouped together in hitherto unexplored arrangements, moving the images from their initial domestic context and placing them in the public domain. Tyszko has added blocks of transparent colour to these retrieved images, giving another dimension to their force of signification. Another new work, one which will decay over the duration of the exhibition, is a memorial wreath bearing a long text relating the deep personal loss involved when someone one loves dies or disappears. Normally the bearer of nothing more than the deceased’s name or familial identity (“Mum” or “Nan”), on this occasion a more convoluted text has been used, one demanding an active reaction from the viewer.

This survey exhibition is, then, a kind of snapshot of Tyzsko’s work to date, together with a number of pieces that develop this in new directions, reactivating it but also expanding what is already a diverse, complicated and ingenious field of objects, references and ideas.