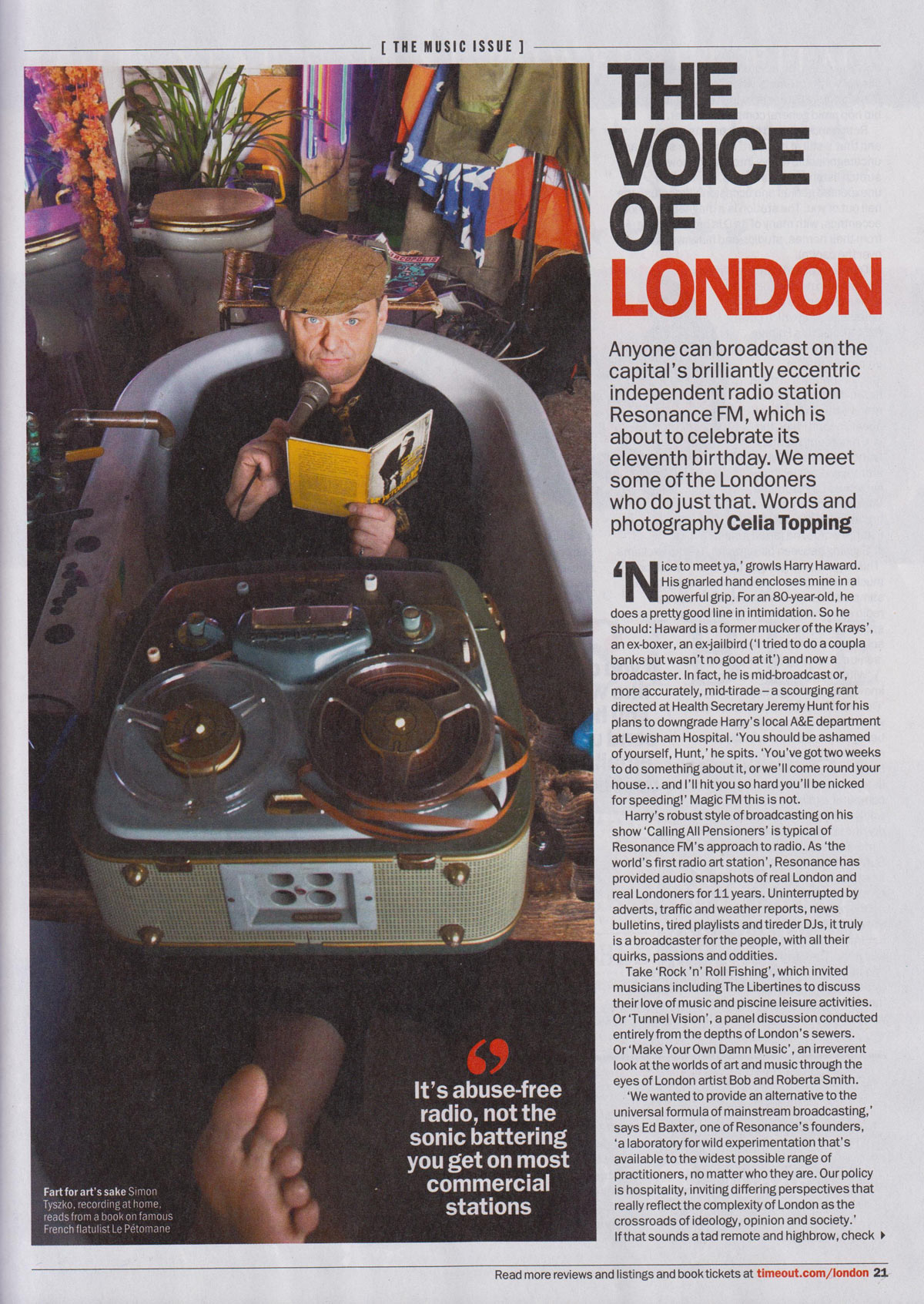 ‘We wanted to provide an alternative to the universal formula of mainstream broadcasting,’ says Ed Baxter, one of Resonance’s founders, ‘a laboratory for wild experimentation that’s available to the widest possible range of practitioners, no matter who they are. Our policy is hospitality, inviting differing perspectives that really reflect the complexity of London as the crossroads of ideology, opinion and society.’ If that sounds a tad remote and highbrow, check out ‘Sicknotes’ on a Saturday night, a raucous slew of youthful energy where a load of teenage DJs introduce listeners to the best of underground hip hop amid general combative banter.

‘It’s abuse-free radio, not the sonic battering you get on most commercial stations’

Resonance started life as an arts project, and that’s still at its heart. Many of its shows are uncategorisable forays into the unknown that stretch listeners’ boundaries, summon unexpected genius and occasionally confuse the hell out of you. The station is a magnet for London eccentrics, with many of its DJs broadcasting from their homes, studios and hideaways all over the capital.

One such broadcaster is Simon Tyszko, who records his show beneath a replica of a Dakota aeroplane wing which cuts right through his Fulham council flat. ‘Phlight’ is an art project that he installed in 2007. I meet him in its shadow as he reads aloud from a book about Joseph Pujol, the late nineteenth-century French entertainer who entranced Parisian high society as Le Pétomane:
Giggling between paragraphs, Tyszko exclaims ‘This is great, I’m going to use this’ – which pretty much sums up his style of broadcasting: taking samples from his vast collection of obscure radio ephemera and mixing them with spoken word, music, noise and found sounds to create what he calls his ‘sonic detour programme’, ‘Isotopica’.

‘With any other radio station, you know what you’re getting,’ he says. ‘But with Resonance you never know what to expect. I can’t imagine not being surprised from one day to the next.’ Over the seven years he’s been on air, Tyszko has taught his listeners how to build a ‘Hackintosh’ computer against a soundtrack of a wildly reworked Vivaldi piece, make the perfect dry martini with interventions from surreal filmmaker Luis Buñuel and interviewed Dudley Sutton of ‘Lovejoy’. ‘It’s abuse-free radio,’ he says. ‘It’s not the sonic battering you get on most commercial radio stations.’

fundraiser last year along with cult comic storyteller Daniel Kitson, who has his own
late-night show. ‘Resonance shows are hosted by people who really know their stuff,’ says Lee, ‘and its occasional rawness and chaos reminds you that it is real radio, and isn’t following the ­­­­transparent commercial, political or religious agendas of most other London radio stations.’ Resonance is financially independent: it’s funded by the Arts Council and patrons such as Grayson Perry. It’s these values that keep half a million Londoners tuning in every week.

‘If you don’t like what you hear, send us an email and do it better’ Although Resonance has an open-door policy, it still seems to occasionally fall back to radio’s default position of ‘bloke plays records’. If it’s going to appeal to younger listeners, it needs more DJs like Veronica Zubic-Nahvi, or Ronnie, who I meet as she takes the mic for her weekly show ‘Zubricant’, a mish-mash of music, comment and interviews.

Of Croatian descent, 17-year-old Ronnie revels in radio as the medium to express herself. ‘Radio isn’t new,’ she says. ‘It doesn’t have a high status, it’s established and stable, which gives you so much room for creativity that might otherwise be restricted on TV or in print. I don’t know what I’d be doing if I wasn’t doing this… wandering around Bluewater with my hood up, stealing lipstick.’

‘We want more young women,’ says Baxter, ‘and old women actually… and middle-aged women… all women!’ he laughs. He is also working with the Migrant Resource Centre to make Resonance less English. ‘There are around 350 languages spoken in London,’ says Baxter, ‘and we only broadcast in six so far. We want to appeal to every community. Radio is an empowering way for everyone to fully participate in society.’

That’s the thinking behind ‘The Clear Spot’, a weekly 8pm slot for anyone who has an idea, a gig to advertise, a drama to play out, a point to make, a discussion to discuss or a campaign to air. Baxter opens it up to anyone: newbies and aspiring broadcasters everywhere.

‘If you don’t like what you hear, send us an email and do it better,’ he says. ‘Everyone should do a radio programme at least once in their life. It’s like punk rock.’

‘Nice to meet ya,’ growls Harry Haward. His gnarled hand encloses mine in a powerful grip. For an 80-year-old, he does a pretty good line in intimidation. So he should: Haward is a former mucker of the Krays’, an ex-boxer, an ex-jailbird (‘I tried to do a coupla banks but wasn’t no good at it’) and now a broadcaster. In fact, he is mid-broadcast or, more accurately, mid-tirade – a scourging rant directed at Health Secretary Jeremy Hunt for his plans to downgrade Harry’s local A&E department at Lewisham Hospital. ‘You should be ashamed of yourself, Hunt,’ he spits. ‘You’ve got two weeks to do something about it, or we’ll come round your house… and I’ll hit you so hard you’ll be nicked for speeding!’ Magic FM this is not. Harry’s robust style of broadcasting on his show ‘Calling All Pensioners’ is typical of Resonance FM’s approach to radio. As ‘the world’s first radio art station’, Resonance has provided audio snapshots of real London and real Londoners for 11 years. Uninterrupted by adverts, traffic and weather reports, news bulletins, tired playlists and tireder DJs, it truly is a broadcaster for the people, with all their quirks, passions and oddities.

Take ‘Rock ’n’ Roll Fishing’, which invited musicians including The Libertines to discuss their love of music and piscine leisure activities. Or ‘Tunnel Vision’, a panel discussion conducted entirely from the depths of London’s sewers. Or ‘Make Your Own Damn Music’, an irreverent look at the worlds of art and music through the eyes of London artist Bob and Roberta Smith.

Listen to Resonance at 104.4FM or www.resonancefm.com.