This weeks Isotopica features a wide ranging and difficult to edit (so much wonderful material) discussion with kinetic/science art/multidisciplinary artist Liliane Lijn.

American born, of Russian diaspora parentage Lijn, studied archaeology at the Sorbonne and Art History at the Ecole du Louvre, in Paris. At the same time Lijn began to draw and paint, (although she didn’t attend art school), whilst taking part in meetings of the Surrealist group, where she met the French writer, poet and theorist André Breton.
The writers and poets William Burroughs, Gregory Corso, Sinclair Beiles and Brion Gysin were in the same circle as Lijn, and their book on ‘cut-ups’ entitled Minutes to Go had previously been launched at the Librairie Anglaise in 1960.

We discuss her works and life touching on projects that include Chemin De Fer (The Power Game 1970-present day), Prisms, working with NASA scientists and much in between. this just may be part one of two… 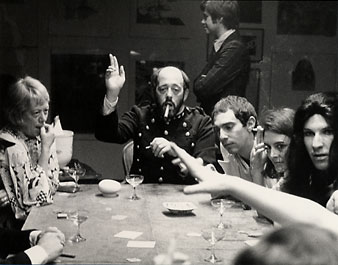 The card game originally called Keys consists of 52 playing cards with a printed word on each side.
First performed in 1974 at the International Festival for Democracy in Chile, Royal College of Art, London in collaboration with Alistair Mackintosh.